The Starburst Galaxy access control system uses roles to provide users with privileges for clusters, catalogs, schemas, tables and other kinds of entities.

You are assigned one or more roles and, by selecting a role, you get the privileges and ownership rights of that role. At any point in time you are assigned one current role, and therefore have access to all roles in the active role set.

In the top right corner of the user interface you can see the role currently selected, and can change the current role by clicking the Switch role link. This opens a list of the current user’s available roles from which to select: 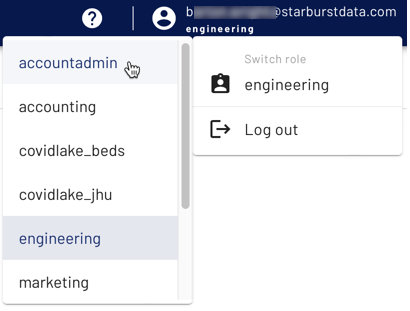 Use the following SQL command to list all current roles of the user:

As administrator with the MANAGE_SECURITY privilege, you can manage all roles and privileges in the Roles page of the user interface. You can also use CREATE ROLE and other SQL statements.

The roles system provides great flexibility and control for organizations that need that fine-grained access control. It’s important to choose roles that fit your organization, and include necessary administrative roles.

If a role is granted to another role, all the privileges and ownership rights of the first role are conveyed to the second role.

One role can be used to grant another role to a user or role under the following circumstances:

By default, every role is implicitly granted the PUBLIC role, and therefore has all its privileges.

The relationship between a role receiving a role grant and the role granted is a parent-child relationship. A role can have zero or more child roles, and always has one or more parent roles. The only restriction on role grants is that they are not allowed to create grant loops. Consequently, roles form a directed acyclic graph.

You can grant one or more roles to a role in the user interface. You can also create role grants using SQL. This statement grants the role support_admin to role sales_admin:

Users may be granted roles, and all users are implicitly granted the pre-defined role public. At any moment a user assumes a single role. That role can be chosen in the UI using the role selection dropdown always shown in the upper right corner of the screen. Alternatively, the role can be chosen with SQL:

A role’s active role set contains the role itself, plus all roles that are descendants of the role.

The accountadmin role is predefined, and cannot be modified or deleted. It is granted the MANAGE_SECURITY privilege, and it can therefore assign any privilege on any other entity to itself. It can literally do anything.

Only a limited list of users should be granted the accountadmin role. Best practice is to create new roles appropriate to the needs of your organization, and grant these new roles only the necessary privileges needed to perform their tasks.

The public role is a predefined default role that is implicitly granted to every user and cannot be revoked or deleted. Administrators can assign additional privileges to the public role.

The _system role is defined by the SQL specification to be a grantor of privileges to all newly-created entities. It has no other function in the roles system, and it cannot be granted to other roles or deleted.

Picking the new roles and their corresponding privileges on entities starts with identifying the different communities of users. In a typical organization most users do not need to create or manage catalogs or clusters, they just want to run queries. They need nothing beyond USE_CLUSTER on one or more clusters.

For these users, it makes sense to create a data_consumer role with only the USE_CLUSTER privilege on one or more clusters. Users granted the role data_consumer can run SQL queries on clusters, but cannot do any damage to any Starburst Galaxy setup.

If users need only one specific cluster at a time, it can make sense to create a role for each cluster with USE_CLUSTER on that cluster, and perhaps additional roles that group these roles together.